Being an independent publisher is rewarding, tiring, and overall a crazy experience, so I like to be as transparent about it as possible. The Kickstarter numbers are public and easy to find, so I won’t rehash those here. This is all about how Dungeon World has faired in general availability.

The short version is: really well.

Lifetime non-Kickstarter sales are at 2652, including print and PDF. Considering that the print version has only been available for two weeks of those first 5 months that’s pretty respectable. Here’s the breakdown. 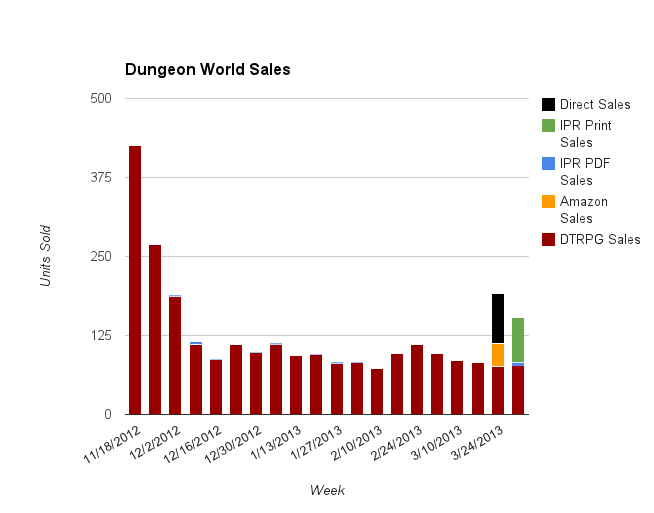 The majority of sales came through DriveThruRPG (and their other storefronts) as that was where we promoted Dungeon World most heavily. This was mostly because the setup was the least painful there, so we ended up being there first, and the cycle perpetuated. Indie Press Revolution, who we really like, was a bit harder to publish to and therefor got less of the hype cycle. What they did get was lots and lots of hardcopies, so they’re very happy now.

The most exciting part of this is that the PDF sales seem to have hit a pretty steady level. If Dungeon World really is able to plateau here we’ll be in a great position to build on it and roll that forward into more cool stuff.

This is all pretty typical stuff for indie publishers to release, but what about costs?

The best numbers I can offer there are for 2012, as I’ve compiled those for tax purposes. 2013 gets more interesting as we travel to cons and so on, but that data is still coming in. I’m a little nervous to make these public, as it’s easy to draw conclusions from these numbers. It’s possible that we’ll get responses like “why didn’t you give your buyers more stuff instead of making money?” With that in mind, I’d rather paint an accurate picture of what publishing Dungeon World has cost. I am obscuring it just a bit as to not reveal the exact deals our vendors gave us, in the interest of not exposing any of their information.

The physical items we created for Dungeon World (softcovers, hardcovers, scoutbooks, dice, pen, pins, patches, notebooks) cost us $19,959.18. The art and editing we obtained cost us $1,725. Shipping costs are still ongoing, but we’ve already spent $31,253.50 on postage alone (not counting packaging and labeling). There are a lot of minor expenses that I’m not summing up here: the printer we use to print postage, the pizza and beer we bought for the folks that helped us pack, etc. That puts our total expenses over $52,937.68.

So that’s a picture of what being an indie publisher looks like, if you happen to come upon a hit. Dungeon World currently has a little over $34,000 in the bank, with more coming in from ongoing sales. That money will be used to pay taxes for 2012 and then a significant part of it will be split between Adam and I.

The interesting thing about this is that Dungeon World could support one full-time developer living somewhere cheap. Adam and I have no interest in doing that—we have jobs we like and want to keep Dungeon World fun to work on—but it’s interesting that it could be possible.

I’ll leave off with a caveat that Adam and I have been extremely lucky here. Dungeon World is one of those rare situations where the right idea happens at the right time and we were the ones who ended up riding it. I’ve had far more ideas that never worked out than successes. Don’t take this as a guarantee of what any indie game will do, we’re lucky outliers here.

Sage LaTorra is a game designer and senior test engineer at Google. You may know him from Dungeon World.

A Change in Format